The True Price of Gas: A Judgement...

With help from those wonderful folks at YouTube -- a movie (with historical relevance) "The True Price of Gas: A Judgement Killing Part One"

Posted by Wind Spirit Keeper at 9:41 PM No comments:


Take a close look at the timeline of the Keeling Curve. 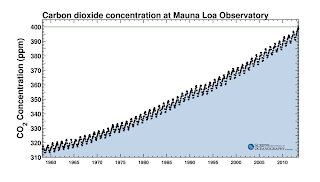 With your eyes, follow the upward arc of the Keeling Curve as carbon dioxide fills the atmosphere – and know that the arc also describes the dominance of the American car, and fossil fuel burning, culture. Yes, an era of coal fired climate controlled shopping mall junk food palaces, and cul de sac housing tracts held together by smoggy asphalt umbilicals, and parking lots for doctors, and priests, and father professors, and mother nurse exhaust pipes, and smog deaths, and asthma attacks, and oil spills. And the nomadic migrations as people leave one smoggy polluted city to go another less filthy town until that new place is as bad, or worse, than the first vacated home. So much for the sanctity of the home.
These are all the rewards of a society gone mad with its own toxicity. But as we know much of the world has taken on this same madness even as Earth’s atmosphere fills up like the gas chamber it actually is.